Carpal tunnel syndrome (CTS) is an injury caused by a pinched nerve in the wrist. The injury causes pain and numbness in the index and middle fingers and weakness of the thumb. The carpal tunnel receives its name from the eight bones in the wrist, called carpals, which form a "tunnel" through which the nerve leading to the hand extends. 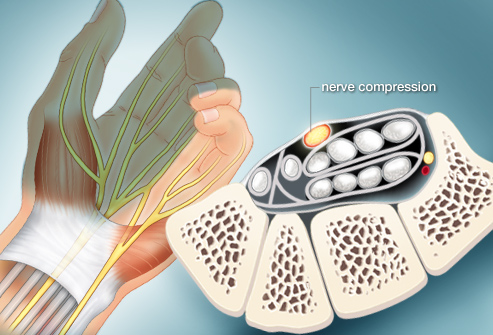 Signs and symptoms of CTS include:

The carpal tunnel is filled with tendons (bundles of collagen fibers that attach muscle to bone) that control finger movement. Tasks requiring highly repetitive and forceful movements of the wrist can cause swelling around the tendons, resulting in a pinched nerve and producing CTS.

Who's Most At Risk?:

People working with small hand tools in manufacturing and those using a computer keyboard on a regular basis are especially at risk.

Women are more likely than men to develop CTS. It most commonly occurs in people ages 40 -60. CTS is associated with health conditions, such as Lyme disease, rubella, pregnancy, and menopause. High caffeine, tobacco, or alcohol intake are contributing risk factors.

CTS is commonly treated by chiropractors. The methods most chiropractors use to treat CTS include manipulation of the wrist, elbow, and upper spine, ultrasound therapy, electrical stimulation and wrist supports. We now are using Laser Therapy with great success. Two studies support the use of chiropractic treatment for CTS.

In the first study, 25 individuals diagnosed with CTS reported significant improvements in several measures of strength, range of motion, and pain after receiving chiropractic treatment. Most of these improvements were maintained for at least 6 months.

A second study compared the effects of chiropractic care with conservative medical care (wrist supports and ibuprofen) among 91 people with CTS. Both groups experienced significant improvement in nerve function, finger sensation, and comfort. The researchers concluded that chiropractic treatment and conservative medical care are equally effective for people with CTS.

Your First Visit
Meet The Doctor